Dear Patti–We did the best we could with the upbringing we had. It was tough–chaotic and parented by two adults who acted more like play-yard bullies.

As much as I’ve been affected (my entire life) you were affected more. Smart move, that coma you never woke up from at 62.

I lived without loving touch unless I was sitting with Grandma Byland on the couch in her mossy green living room. You lived with unwanted touch–that of our father, the respected firefighter, the hydroplane builder and racer. You were only 3, I’m told, when he stole your smile by fumbling around with your tiny child body.

We both lived with nonsensical rules. I never knew what was okay–can I go to a friend’s, not go to a friend’s? I was never quite sure, and the answer could be different depending on the Mood of the Mother. I was too afraid to step outside any vaguely perceived lines, so I kept my feet in a tight little box. You pushed the boundaries because for you the parents were always going to punish, it didn’t need a reason. You were the scapegoat, my big sister who was always tinier than me in stature but bolder in purpose and fight.

Me, I was (and still often am) the Deer In The Headlights, frozen in place, unsure and playing dead. You, well, I think all the fight was used up by you, and you needed it more. Fighting to keep our father’s hands off you, fighting to have the right to enjoy your life. I’ve heard from one of your friends of the time you were to be in a school talent show, but our parents took it away from you. That you were supposed to be on the cheerleading team, and that was also stolen by our parents for God knows what reason. If it was good, you weren’t allowed.

You were a brilliant student–I mean, straight A’s in Russian?? I think you were straight A’s in all of your high school years. I followed our brother, the oldest, a charming goofball, then you the supreme student. I was a good student, a more than adequate student, but I was neither charming nor brilliant. I was just me, a scared-to-death teen who didn’t even attempt to be part of anything extra in school. In fact, when the job was offered to me for putting together a collected writings of my Creative Writing class, I froze and cried–don’t see me! I will only fail! I will disappoint!

For me, the youngest, I think our parents were too worn out by their volatile emotions and constant warring to be hard on me. I mean, all three of us wet the bed for years–trauma will do that to a child–but where you would be in trouble, spanked and yelled at, I’d be told wearily to put a towel on my soaked sheets and go back to sleep. I thought it was a sign of great care when our mother would put my sick self on the couch in the front room with a chair next to it holding water and graham crackers. But I never had her company, her words of comfort, just a chair with crackers. Looking back I know that she didn’t really want us once we were no longer babies, so why would she emotionally attend to our needs?

It’s so twisted, having children that you don’t like, but once we had our own thoughts and words and opinions we weren’t fun anymore. Our brother Michael–he could charm, he was funny, his friends were entertaining to Marge, our mother. During his high school and after years there was a muslin tablecloth his friends would write on and sign, and Marge would then embroider. You caught a little bit of that joy by being close in age to Michael and having friends in common, but I wonder if that was bittersweet for you. It would never be about you, the celebration, the fun. For you it would always be about beating your spirit down, finding ways to steal your joy.

For me, it would be about being sick, my thyroid having quit before I was 5, taking trip after trip to the hospital on the hill–Oregon Health and Sciences University in Portland–to study and treat my failure to grow normally. Sacrifices made to get me help.

What kind of childhood was that? For you, the kind that slowly killed your soul, sent you into depression, self-loathing, and a fair amount of wine. For me, the kind that sent me to seek a partner that was familiar in dysfunction, plus depression and self-loathing. We both had so much anxiety. Mine kept me from good relationships, from accomplishments, from finishing college.

For our brother? I don’t know what his childhood did to him except make it easy for him to abandon us after our father died. Easy to walk away with no forwarding address, to never be heard from again. Does he even know you’re gone?

Patti, I miss you all the freaking time. You’ve been gone for eight years now. You’ve missed me running away from home, from the #marriagefromheck. You’ve missed me growing and learning and realizing that I can love myself, and writing a blog about that exact thing.

I miss our silly punchlines that we couldn’t remember the joke to, our borrowed phrases like “sisty ugler” from the fractured retelling of Cinderella, our sadness gone humor about our family. I miss how we used to refer to Marge as “Michael’s mother” in conversation to mockingly distance ourselves. I miss your “I love you more” at the end of every conversation.

I wish we’d both known how amazing we were, that all the trauma didn’t make us Less-Than. That there was a reason to be alive. That we could grow and change and heal.

I’m doing that now for the both of us.

Wish you were (still) here. 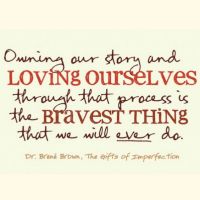